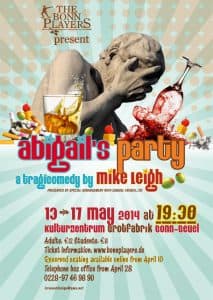 The scene is an English suburban house in the 1970s. Beverly has decided to throw a little drinks party for her new neighbours Angela and Tony, and divorcee Sue, whose teenage daughter Abigail is herself giving a somewhat wild party at Sue’s home. The adult party escalates into a far greater nightmare, as stressed-out estate agent and host Laurence, and manipulative, domineering hostess Beverly play out the tensions in their relationship. The naive and eager-to-please nurse, Angela, constantly irritates and embarrasses her socially awkward husband Tony – and Sue feels trapped between two “parties from hell”. The play is performed in the semi-round, possibly too close for comfort, and the audience will, in turn, squirm in their seats and laugh. But be warned: it will end in tears.

Abigail’s Party, despite having some hilarious moments, has been variously described as “one of the most painful 100 minutes in British comedy drama” and “a deep, dark, moving and beautifully observed period piece”.

This much-loved and frequently performed play was devised and directed by Mike Leigh in the late 1970s. At the time he wanted to create an unforgettable vehicle for his then wife, Alison Steadman. She shot to fame with this role and continues to be a highly popular stage and screen actress.

Leigh had already written several plays originating in improvisation, and he went on to create films in the same way. Some of the most well-known of these include Happy-Go-Lucky, Secrets and Lies and Naked. The fact that the original cast of Abigail’s Party “invented” their own character’s background and dialogue, months before any actual “script” was written down, gives this playa unique sense of real life being played out on the stage, with the audience in an uncomfortable “fly on the wall” position.