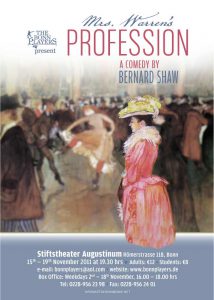 Performed at the Stiftstheater Augustinum
From 15 – 19 November, 2011

Kitty Warren is a Madam who runs a high-end prostitution ring. We meet her daughter, Vivie, an emancipated, intelligent and self-sufficient Cambridge graduate,

As the play unfolds, Vivie must come to grips with her mother’s long-kept secret. How will she handle the truth? Shaw’s sparkling wit and clever dialogue keep us guessing at each turn of the story, as the stark questions about social justice, sexual relationships and parent-child conflicts posed by the play lead the characters, and the public too, to seek suitable answers. This is a play of instincts and temperaments in conflict with each other and with a flinty social problem that never yields an inch to mere sentiment. The two women, and the four men who circle around them, behave like human beings instead of conforming to the romantic logic of the stage.

This play is a battle royal between mother and daughter, the ultimate test of a mother-daughter relationship. The stakes are high and the onstage confrontations between these two women encompass the struggles of women and of society that are still resonant today. It is a play about choice and what happens when choices are limited. We see the contrast between a woman’s limited options and her strong will to succeed. Ultimately, this play is very much about alienation — how societal pressure (money, career, family, survival) can isolate individuals from each other.

Shaw wrote Mrs Warren’s Profession in 1893-94 to draw attention to the truth that prostitution is caused, not by female depravity and male licentiousness, but simply by underpaying, undervaluing and overworking women so shamefully that the poorest of them are forced to resort to prostitution to keep body and soul together. In this play, society, and not any individual, is the villain of the piece.

Mrs Warren’s Profession angered authorities so much that the government censor would not approve it for a licence allowing public performances. It was eight years before a private club produced the play, and the first public performance in Great Britain did not take place until 1925. When the play premiered in New York in 1905, the cast, director, and theatre manager were arrested as the curtain closed. As late as 1955, the play was banned as immoral in Paris.

Today, the comedy remains one of Shaw’s most provocative works. It is a vivid reminder that there are still economic and social pressures that force individuals into questionable choices and unlawful behaviour, and others who benefit by exploiting them. The Bonn Players are pleased to have the opportunity to draw attention to those ideas and bring them to life on our stage.