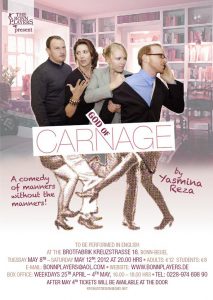 Two professional couples from a supposedly polite neighbourhood of New York City, described by one of the characters as a ‘haven of security’, meet to resolve a playground altercation between their eleven-year-old sons, which has left one of the boys slightly injured. The adults start the evening with a polite exchange of diplomatic niceties, but soon tensions begin to emerge, and fuelled by alcohol, the meeting rapidly descends into a verbal free-for-all, leaving the couples’ liberal principles in tatters. The German word Gemetzel (from the title of the German translation Der Gott des Gemetzels) perhaps describes most aptly this complete abandonment of mutual respect and dignity.

The play, described by the New York Time as “a study in the tension between civilized surface and savage instinct”, was made into a film in 2011. It starred Jodie Foster, Kate Winslet, Christoph Waltz and John C. Reilly as the warring parents, and was directed by Roman Polanski.