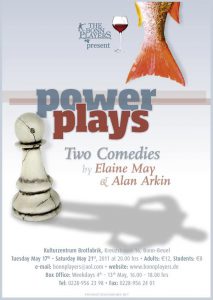 Power Plays is a beguiling and darkly funny double bill about “the collision of wills, the sort of exasperating conflicts that are elemental to comedy from slapstick to Shakespeare” (New York Times). The two plays, The Way of All Fish by Elaine May and Virtual Reality by Alan Arkin, are a neatly matched set, each a study in the struggle for control between two characters.

The Way of All Fish – named for a type of male fish that can turn into a female if bested by a more powerful male – involves Ms Asquith, a powerful executive of some never defined enterprise and Miss Riverton, her meek and mousy secretary, settling in for a rare take-in dinner at the office. Once the food arrives and several glasses of wine take effect, the mouse begins to roar by revealing her not so mousy fantasy of obtaining fame through killing someone famous.

In Alan Arkin’s Virtual Reality a pair of men, previously unknown to each other, meet in an abandoned warehouse to await the arrival of crates containing what they need for a project whose purpose is never stated. Vying for control, the two men perform a “virtual dry run” of unpacking the crate, the contents of which are equally unknown. What begins as something purely hypothetical assumes an autonomous existence that transports the men to a remote frozen wilderness. They grow close; they grow apart; they become mortal enemies.

Both playwrights are well-known in the US, Elaine May chiefly as a comic actress, and more recently as a screenwriter. She received Oscar nominations for Heaven Can Wait and Primary Colors. Alan Arkin has written and directed, but achieved acclaim as an actor, in movies such as Catch 22 and Little Miss Sunshine. He has received three Oscar nominations, twice for Best Actor very early in his career, and once as Best Supporting Actor. In 2007, at the age of 72, he received a BAFTA Award for Best Actor in a Supporting Role.

The Way Of All Fish
Directed by Margot Nisita