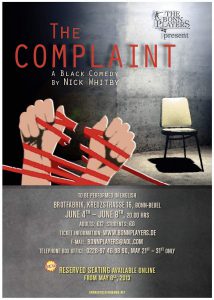 Performed at the Kulturzentrum Brotfabrik
From 4 – 8 June, 2013

Afra has decided to make a complaint. She is certain that her grievance is legitimate: she is perfectly clear about her rights. And she has no intention of giving up until she has some satisfaction. She is tenacious and refuses to rise to the bait in the face of bureaucratic red tape and inefficiency. It is expected that she will soon tire of her lack of progress and simply give up, but she doesn’t. Whatever Afra’s complaint is, it certainly spooks the entrenched bureaucracy, who are themselves destabilized by demands “from above” to evolve and modernize.

The Complaint was written in 2011 during the Arab Spring, but is not intended to refer to anyone geographic area. It is about the ability of individuals to challenge and ultimately change a rigid bureaucracy. There are reverberations throughout the play to situations everyone will recognize who ever had to deal with a bureaucratic system, even those who do not consider themselves to be living in an authoritarian society. While the play is often called Kafkaesque, it is a reversal on Kafka in that it is the administration that is in a state of angst, and the individual who holds the mystery.