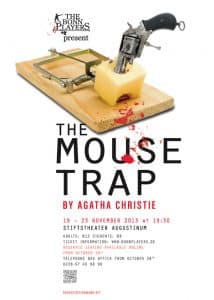 Performed at the Stiftstheater Augustinum
From 19 – 23 November, 2013

The Mousetrap is an archetypical mystery thriller. Eight people are snowed in at a guest house: Mollie and Giles Ralston, the owners; four invited guests; the unexpected guest, who turns up out of the blue after his car overturns in the snow storm; and finally a skiing detective. No one is quite what they seem. They all have secrets. Before long a murder takes place. Everyone is trapped – they have no means of contacting the outside world, and the murderer is among them! The detective assembles all the guests together and interrogates them one by one. Each avoids the truth, some by silence and others by lies.
Can the murderer be caught before there are more deaths?