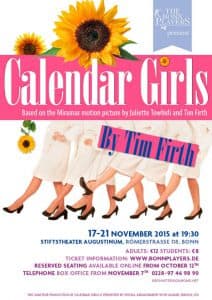 Performed at the Stiftstheater Augustinum
From 17 – 21 November, 2015

Calendar Girls is a stage adaptation of a well-known 2003 film telling the story of a group of women from a Yorkshire Women’s Institute. When Annie Clarke’s husband dies of leukaemia at an early age, her friends decide to buy a new sofa for the visitors’ lounge in the hospital where he was treated. One of the members, Chris Harper, hits on the idea of producing a quite different annual calendar, showing members doing traditional Women’s Institute activities like baking and knitting, but in most unusual “attire”. The project sends them all off on a journey of self-discovery through sorrow and joy, tension and laughter.

The play is based on a true story, when members of the Rylstone Women’s Institute did exactly what is seen in the film and on the stage. Their venture was a huge financial success, and they have raised an enormous sum of money for charity.